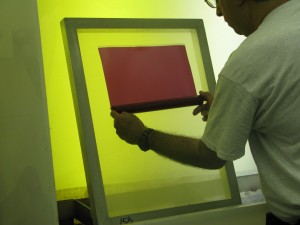 A successful print depends upon the coating of your screens as much as anything else.

But the emulsion or coating method you select will vary depending upon a number of circumstances. These will include the type of exposure unit you have, the ink you’re going to use (water-based or plastisol), and the type of printing you’re going to to do (half tones), to name some.

Screen-coating materials come as either emulsions that are pre-sensitized or are accompanied by a diazo powder that has to be added to sensitize the emulsion, or as capillary film.

The pre-sensitized emulsions are very sensitive to light and are fast-exposing emulsions, which is a downside for newer shops that may not have the darkroom facilities to handle it properly. Initially a diazo emulsion would be a better alternative for new printers.

The diazo emulsions are slower-exposing but this gives you more latitude for exposure timing errors. It’s a better alternative, at least initially. But If you’re sensitizing emulsion you need to do so about twenty-four hours before you use it to coat a screen. The time is needed to allow the diazo to dissolve completely and for the air bubbles accumulated during stirring to escape. If the air bubbles are not given this time to escape, you’ll end up with pin holes on the screen.

Capillary film is essentially an emulsion film that you unroll and apply directly to the screen. It’s obviously light sensitive and must be applied under controlled conditions. The advantage is that the thickness is very precise and can be ordered according to the thickness you require. It is however more expensive per surface area than liquid emulsion.

Any of the experts at Stanley’s four branches can advise you on screen-coating options best for your shop or for any particular job.